Happy New Year!
This month has been a strange one, but it ended with an amazing night out on New Year’s Eve and I began 2016 happy and optimistic (and drunk of course).

Earlier in the month, I went to my Grandma’s funeral with my family, where we were joined by a mass of people whose lives she had touched. She didn’t want it to be religious and the songs she chose were amazing, but she saved the best till last – Free Bird by Lynyrd Skynyrd! It had me and undoubtedly others mentally dancing as we remembered her, imagining her dancing too. It was brilliant, like she knew just the song to cheer us up and help ease our grief.

If you’re a gamer, you may know this song from GTA 😉 For me, it reminds me of flying various aircraft into the sunset whilst listening to K-Dst and this song was one of my favourites 🙂

Naturally this month my work has come on a little slower, but what I have achieved has come along in short bursts. Since my last post, my (short term)tasks were: 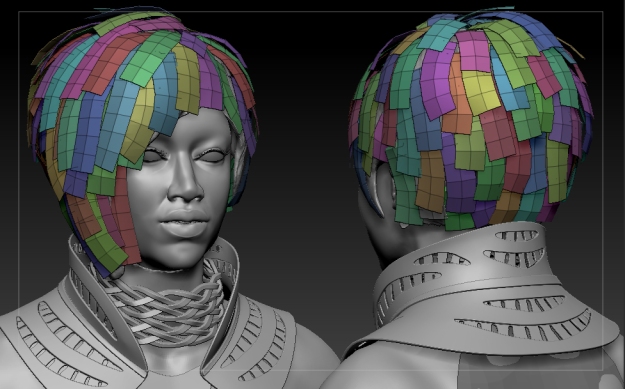 Created some new IMM hair strips from scratch again, this time lower poly. I spent around two hours meticulously placing the newer hair strips over the hair mass I was using as a placeholder/guide. 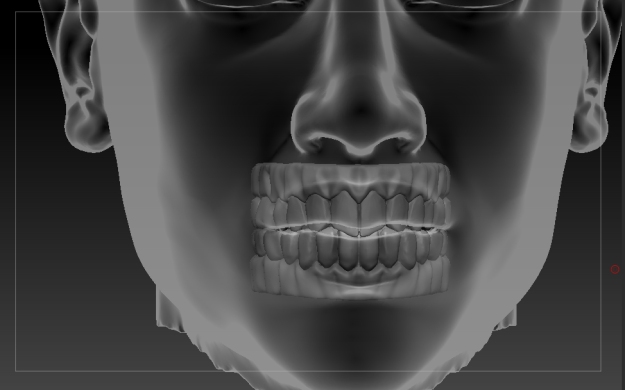 I had some fun making the teeth whilst I pondered what I could do with the animation if everything goes right (Haaaa) and how I’m going to render Kindzi to bring out the best of my work. With my FMP, the lighting let my characters down and so with Kindzi I plan to spend a lot of time experimenting with lighting and atmosphere.

I’ve not yet made her second set of teeth yet, as I decided I’d do more research on facial rigging beforehand. If I remember rightly, I know there are things that I can do with morph targets in 3ds Max that would save me from having to make the second set. Also, as I’d been working on the teeth and jaw, I ended up tweaking the face too.

I did some texture tests on the hair strips to find that without the placeholder I was using to place the strips on, there were awkward gaps between some strips breaking the consistency of the rest of the hair. 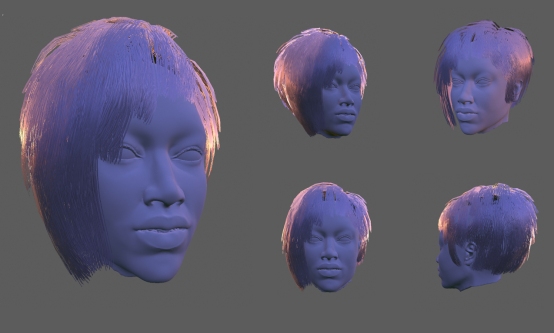 Whilst I was quite impressed with most of it, I decided it’d be best to just do them again. I’d also remade new hair alphas with variations on thickness and wave, which when tested made the gaps even worse. Hurray for another so many hours of meticulous placing! ^_^

Trying to problem-solve my way out

With that, I jumped back to the clothes again. I had another go sculpting clothes folds again, then I had another go in Marvelous Designer. I made the jumpsuit, but wasn’t getting many convincing details out of the simulations. I took screenshots, scribbled and experimented again but eventually spent my energy.

So I hit a dead end, got stuck and at some point decided to improve my portfolio during the Christmas period by doing some more informative renders and getting the texture maps on. I’ve noticed I don’t have any detailed In Situ/Beauty renders on my portfolio and so that’s something I have to make up for with Kindzi.

So when it came to improving the male study images on my portfolio, I went back to the idea of giving him some clothes (the reason I hadn’t done this before was because the project had dragged on too long).
I had some fun with it and collected a duck load of sewing patterns on Pinterest, then made them in Marvelous and simulated. The only difficulties I had were with size, but I learned a lot about how to simulate better clothes and why it didn’t work out so well in previous attempts.
I could have gone further with the clothes, importing them to zbrush, adding additional folds etc.,  but I thought I’d leave it as a side project when I get bored or frustrated with my current project. 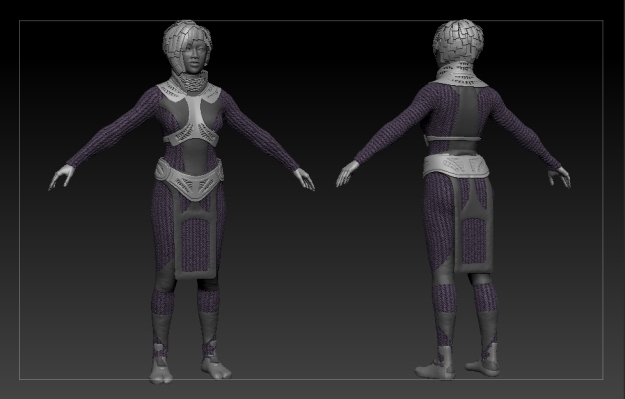 After this, I switched back to my current project, reviewed my previous attempts with Kindzi’s clothing and again found some patterns for jumpsuits. I had another go at making her jumpsuit, before deciding it’d be best (and more fun) to start with her dress and so I saved out a basic file and put it to rest.

This is as far as I got before celebrating the New Year!

Over the weekend, I came back to my project and went over all of the things that had been delayed between Christmas and New Year to bring them up to speed. I’m really excited to add in the final tertiary details and start texturing so obviously I want to get old tasks out of the way asap.
I feel like I’ve levelled up my sculpting skills, next are the texturing and rendering skills!

So using a sewing template that best matched the style of Kindzi’s dress, I faffed and experimented until I reached something that I liked. 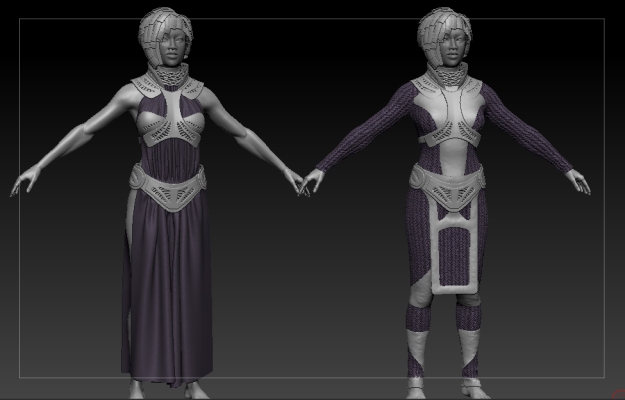 Then, after setting up the dress up in Zbrush, I compared the two outfits and also started redoing the jumpsuit in MD again. Whilst the jumpsuit is quite thick and doesn’t show heavy wrinkles in the reference, I’d still quite like to get in some more folds to get more contrast between the materials.

One thing that has been nagging at me for a while is the fact that there is going to be SO much PURPLE in this project, so I’m going to have to try and do something clever with the colour palette to prevent this project from becoming flat.

By my next post, I’d like to have moved onto polypainting, retopping and unwrapping. Between now and then, my tasks are:

– Redo the hair strips (Aghhh… it’s fine.)
– Finish the jumpsuit, make adjustments to dress.
– Make my own tileable texture for the jumpsuit.
– Add tertiary details to clothes and armour, i.e. seams, noise, wear and tear.
– Merge the body and add tertiary details to skin (and fix those arms!).
– I may even bring her arms down a bit, to more of an A-Pose – It might make more of a difference in the MD simulations.